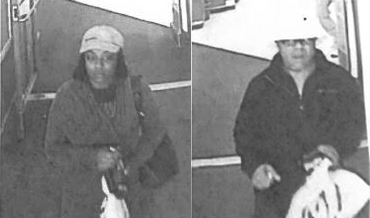 The Howell Township Police Department is seeking the public’s help in identifying the suspects in several theft/credit card frauds that occurred at various stores in Howell Township on multiple days.

On October 9, 2016 the black male pictured in the attached photograph entered the “Staples” store in the Friendship Plaza in Howell.  He is observed on surveillance footage entering the employee lounge where he removes credit cards from an employee’s wallet.  The credit cards were later used at “Target” in Howell.

October 9, 2016 unknown suspect(s) entered Famous Footwear located in the “Howell Commons” shopping plaza on Route 9 in Howell.  The suspect(s) entered the employee lounge where they removed the victim’s credit cards from her wallet and later used them at Target in Brick Township.

October 11, 2016 a theft/fraud victim reported that her credit cards were removed from her wallet in the employee lounge of a store in the Freehold Raceway Mall. The cards were used later at the Howell Target.

It is believed all the incidents involve the same suspects. The suspects, pictured in the attached photo, are a black female possibly in her early 20s and a male possibly in his 50s. The male is wearing a “bucket” style hat during every crime. These individuals are suspected of similar crimes in several other towns in New Jersey.

Anyone with information is asked to contact Howell Township Police Department Detective Corporal Nancy Carroll at (732)938-4575 ext. 2884 or by e-mail at ncarroll@howellpolice.org​​​​​​​.