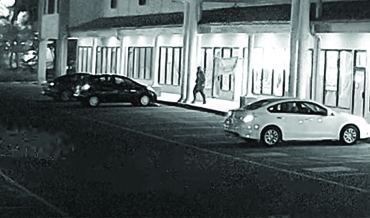 The Howell Township Police Department is seeking the public’s help in identifying the suspect of an Armed Robbery, which occurred on November 7th, 2016 at approximately 6:00 p.m., at the “Shoe Palace” store located at #6951 Rt.9 North.

On Monday, November 7th, at approximately 6:00 p.m., a suspect described as a black male/approximately six feet tall/muscular build/wearing a black “North face” sweatshirt with black flannel style pants, entered the store, at which time it was occupied by store employees, as well as customers to include children. The suspect then brandished a black handgun, ordered the occupants of the store to the ground, and demanded the clerk behind the counter to hand over the money in the register, while pointing the firearm at him. The store clerk complied and the suspect fled the store on foot, without further incident, across the highway, west bound toward Ford Rd.

Area surveillance footage shows the suspect walk to the store, from the area of an adjacent commercial lot, after he was observed by the store employees walking back and forth multiple times, before entering.

Patrol officers responded, established an area perimeter with the assistance of a K9 unit, but were unable to locate the suspect in the area.

Anyone with information is asked to contact Howell Township Police Department Detective Anthony Romano at (732)938-4575 ext. 2879 or by e-mail at aromano@howellpolice.org.

Anonymous tips can be sent to the Monmouth County CRIMESTOPPERS
We will not ask your name. We just need your information.
Call 1-800-671-4400 or
Text "MONMOUTH" plus your tip to 274637 (CRIMES)*